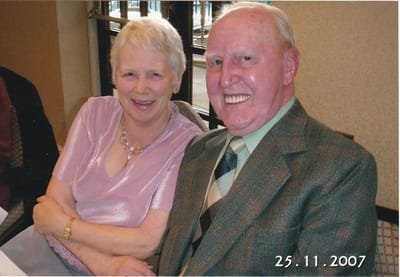 It is with a mixed sense of great sadness and pride that I find myself writing these words for a man who I held in the highest esteem. A man who was a true father figure to me.

I first met Wilf, as he was known, when I joined Freemasonry in 1999.We immediately “got on” and hit it off straight away; but then again Wilf did with everyone he met. The smile above, says it all.

He attended Thorpe school and was the first child to go onto and attend Stanley Secondary Modern. One of his daughters, Marjorie, still works there.
Wilf left school at 15 and started an apprenticeship at William Barr, (better known possibly as Wallace Arnold), as an apprentice Mechanic.
At the age of 18 however, Wilf was called up and joined the Army. He was in REME, (Royal Electrical and Mechanical Engineers) serving most of his service in Germany.

Back in civvie life, he married the love of his life, Marjorie, in September 1948 and had two daughters, Ann and Marjorie.
He worked at Millers and William Irwins as a plant manager, before retiring at 58.

During this time, Wilf was introduced to Freemasonry and was initiated into Liberty Lodge on 12th June 1975. Working his way up the ladder, Wilf became Master of that Lodge in 1987. Travelling across Leeds to attend Liberty Lodge however, was becoming more difficult and so Wilf decided to join a Lodge closer to home. I am so pleased that Wilf chose to join Cockburn Lodge. He did so in 1994 and I know personally that Wilf thought the world of Cockburn. As did Marj.

This is evident to this day. Marj has repaired our banner so many times, I doubt anyone can remember how many. If anything needed adjusting or sewing, Marj was the first port of call. Likewise, Wilf, so good with his hands. He crafted the cabinet that holds our Past Masters Jewels as well as the box that holds our Consecration Jewel.

If anyone in his family needed anything mending, they would go to Wilf who would say,” What do you think I am a Penny Marvel?”

Wilf and Marj were inseparable and went everywhere together. It’s no surprise that it came as such a shock when we sadly lost Marj in April 2018.
When the time was right, Wilf returned to Lodge meetings, which he continued to do until illness prevented him doing so.

Wilf will be greatly missed. He was always immaculately turned out, disciplined, a good listener, would do anything for anyone, a grafter, spoke wisely, never a bad word to say about anyone, a true Gentleman and a role model.

A favourite mantra of mine is; “out of every negative, comes a positive”.

You may be asking where is the positive in this?

Well, Wilf leaves behind his daughters Ann and Marjorie. There are 4 grandchildren, (3 girls and 1 boy) , and 6 great grandchildren.
Perhaps more importantly, Wilf and Marj are together again.

All is well and all shall be well.
07554441959
Thornfield House Britannia Road Morley Leeds West Yorkshire United Kindgom